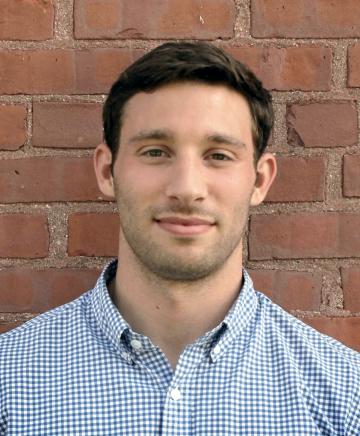 Thoreau had a natural ability to create a captivating story that reached people on multiple levels: emotional, scientific, spiritual, pragmatic. At Oxbow, I’m helping clients make a fundamentally human connection about things that matter to them.

B.A. in Environmental Studies and Architecture from Middlebury College, 2012

When asked to list the qualities that characterize the Thoreau Scholars he has known, Evan Deutsch is quick to answer. “Open-minded. Results-focused. Endlessly curious. They have a drive to really understand and make things happen. Which is to say they are very much like Thoreau, actually. That relentlessness paired with curiosity is a pretty powerful combination.”

These words could equally apply to Evan himself, Co-Founder and Managing Director for Oxbow, an award-winning, Burlington, Vermont-based creative agency that produces animation and interactive content for an impressive list of clients, ranging from TED to Nike to National Geographic. It takes drive and grit to lead a successful business in your mid-20s, but when it comes to producing the kind of content that will move hearts and open minds—the kind of work for which Oxbow has become known—an innate curiosity about the human experience is just as critical. It is the opportunity to explore the varieties of human experience and perspective that motivates Evan in his work. “Thoreau had a natural ability to create a captivating story that reached people on multiple levels: emotional, scientific, spiritual, pragmatic. At Oxbow, I’m helping clients make a fundamentally human connection about things that matter to them. The recent video we produced for Merck’s 125th anniversary is a great example. It’s really gratifying to tell the story of the millions of people whose lives have been impacted by the vision of the company’s founder.”

By his own admission, Evan didn’t set out to lead a creative agency after college. “Coming out of Middlebury, I was a bit all over the place professionally. It was hard to translate the academic experience, which is very theoretical, into next steps.” During this time, Evan recalls, the stories of other Thoreau Scholar alumni provided some reassurance. “Many of them talked about how their path had been non-linear, and it gave me hope that the various threads of my life would converge at some point.”

Eventually, Evan took a job with the Center for Social Entrepreneurship at Middlebury. It was this exposure to social entrepreneurship that led him to take a leap of faith when Oxbow co-founder and good friend Jon Portman approached him to help expand his animation business. “We saw an opportunity to do work that made a positive contribution to the world, for clients whose missions we could get behind. And to have fun doing it.”

Evan and Jon have succeeded in spades. This past year, Oxbow developed the visual media for a series of TED Talks in New York, as well as the annual TED2016 conference in Vancouver. They also produced a profile piece for National Geographic, and an animation for the Center for Food Safety on the harmful effects of neonic seed coatings in popcorn. “We’re also doing work for global corporate clients,” says Evan, “but at Oxbow I have an amazing creative outlet for my interest in the sociological angle of environmental affairs.”